– the truth about the 7 trombone slide positions and where to find every note.

The trombone has 7 slide positions, and you can play a selection of notes on each slide position. The notes are based on the harmonic series (or overtone series). The harmonic series on the first slide position starts on the tone Bb, usually considered the base note of the trombone. (Unlike trumpets that are transposing instruments, trombone players actually call the notes by their real name, so when we say Bb we mean Bb. When trumpet players say Bb they mean Ab. And when trumpet players claim that C is their base note, they too are talking about Bb, just one octave above the trombone.)

The notes on the first slide position

In theory, there is no upper limit for what notes you can play on any given slide position on the trombone (this goes for all brass instruments). Your embouchure and strength and technique will set the limit. These are the notes you can play in 1st position. The smaller the notes get, the harder they are to play. You will probably need to be a professional trombone player to hit the very highest notes, and even if you can actually play them, you might not be able to put them into good use.

Playable (more or less…). notes on first slide position on the trombone.

This is all due to the physics of the trombone and the wavelengths of the individual notes. Let’s not dig deeper there for now ?

The notes on the second slide position

When you move the slide one position further out, the row of notes will be transposed down a minor second, just as if you move a capo one fret closer to the head on a guitar. That means that these are the common notes found on the 2nd slide position:

As you move to 3rd slide position, the first note will be Ab, etc. As I mentioned before, this means that several notes can be played on different slide positions. The higher the note, the more slide options there usually are. This is why trombone players use alternate positions. Sometimes it is more convenient to play an F on the 6th slide position instead of 1st. Take a look at the Ultimate Trombone Slide Chart further down in the article. Here you will be able to spot all the notes that can be played on more than one slide position as well as the slight adjustments needed for certain notes on certain positions. 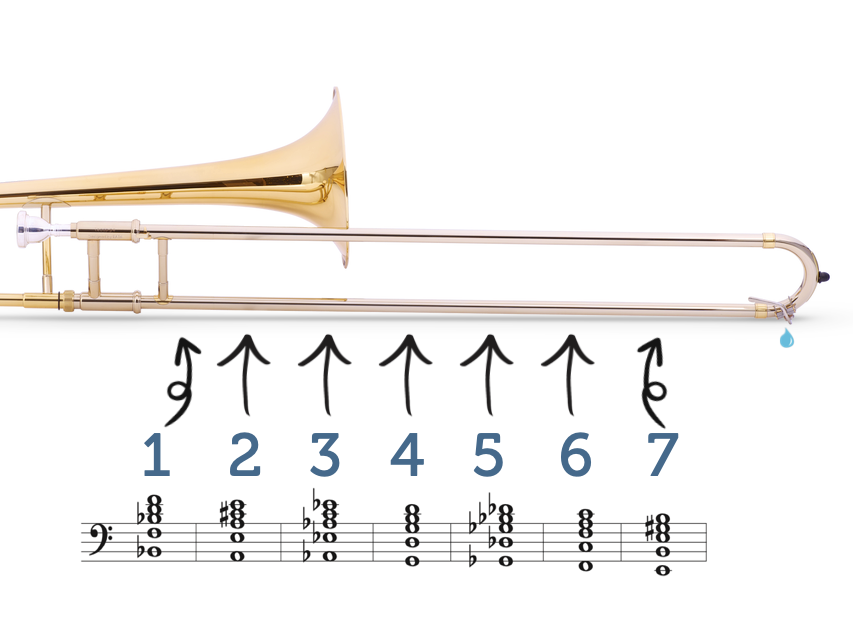 And before we round this chapter off, and move on to the more advanced stuff, here is a complete list of the notes on a trombone, their name and what slide position they are found at. Note that many of the notes could be played with alternate positions as well, but this is the most common solution. 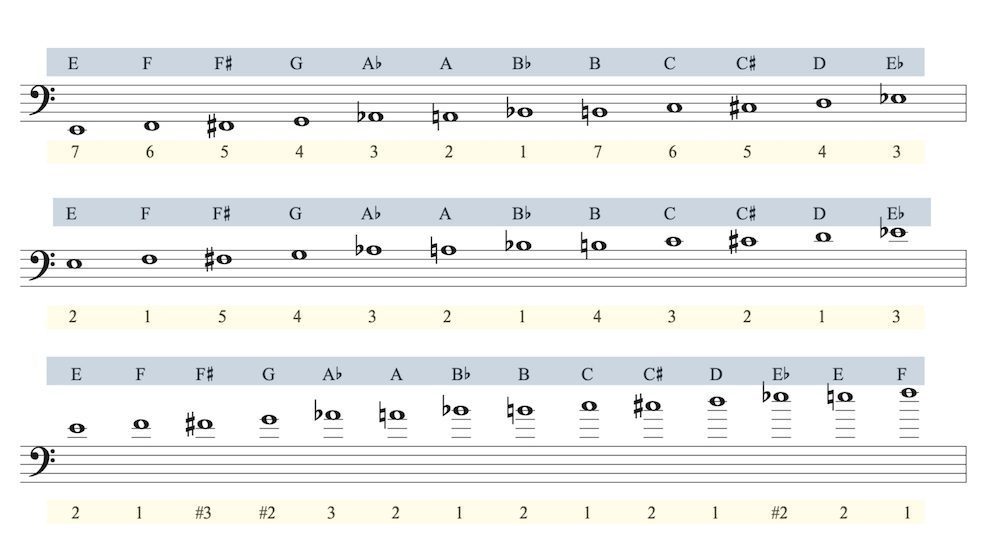 A trombone lesson about intonation

“The Divine Slide Trombone is the only instrument that in theory can play in perfect tune, but in practice never does.”

Luckily, since his days, trombones have evolved and are now made of metal instead of marble. And many trombone players have learned to actually play in tune as well! But Sokrates was on to something. Since we have a slide instead of valves, we can actually adjust the pitch and make it perfect without compensating with the lips. On a brass instrument with valves, you have to do the fine-tuning with the embouchure, and on some notes with a trigger.

So, what about that 20 positions trombone?

While most textbooks and teachers (and me earlier in this article) argue that the trombone has 7 positions, I say that trombones actually have more than 20 positions.

Try playing G, B, and D on 4th position without moving the slide on your trombone and without adjusting the pitch with your embouchure. Can you hear that they are out of tune? When the G is in tune, the B will be a bit sharp and the D a bit flat. Now try it with small adjustments and make sure every note is in pitch.

Now, to make it a bit more confusing, you might be aware of the fact that in a major triad, the third should be held down and the fifth should be held up. Looking at for example above with the G major triad played in 4th position, I suggest that on the trombone, you should hold the third (B) up a bit and the 5th (G) slightly down – the opposite of the best practice for triads. This is due to the physics of the trombone and harmonic series, and this overrules the best practice of triad intonation.

You should be aware of all the minor changes and try to incorporate them into your playing without having to think about it. Note that the amount of adjustment needed will vary from trombone to trombone. My Shires trombone calls for slightly bigger adjustments than some of my other horns, so try it out on your trombone and see how much adjustment is needed.

Please note that the amount of variation within one slide position varies from trombone to trombone, and also from player to player. So you might not end up agreeing 100% with the chart below, but it is a good starting point when you want to dig deep into trombone intonation on your instrument. 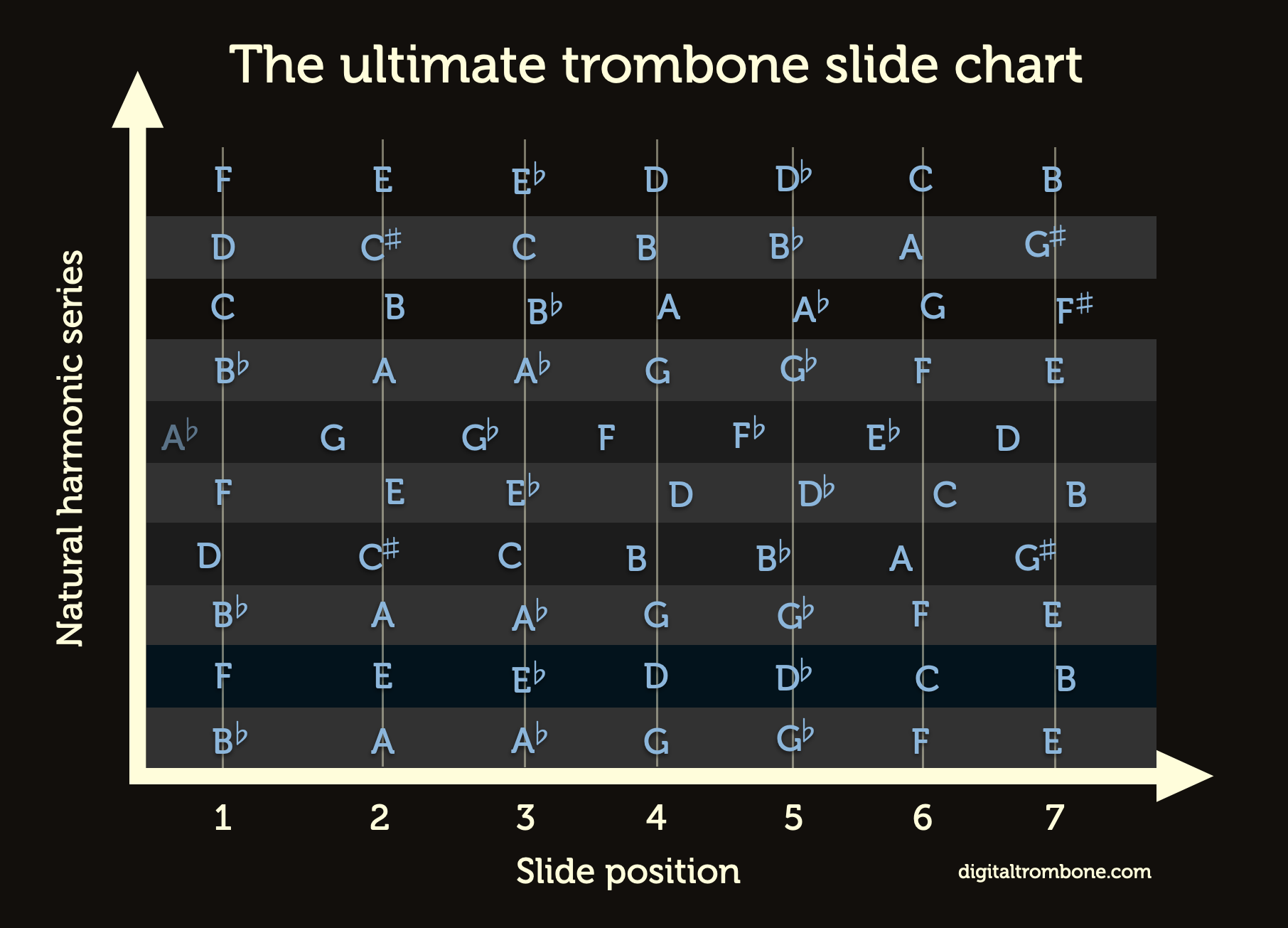 Theory vs. practice in trombone intonation

So, in practice, is this how pro players make sure that they play in tune? Not really. It all comes down to being able to hear the note you are about to play before you play it, and have the correct pitch in your head. This way you can actually play in tune without having the slide in the exact position. But knowing about all these sub-divided positions will help you hit the pitch you are aiming for.

So when playing in an ensemble, there are three ways to make sure you play in tune:

Remember that when playing a long note, you might actually have to correct the pitch halfway if the chord is changing. Try playing these two chords with some fellow musicians and see what happens with the top note when the other two change notes. You will have to intonate the B in the second bar up slightly since the function changes from being the third in a major G chord to being the fifth in a major E chord.

The basic principles are the same for all brass instruments: you have some tubing that can be made longer in order to be able to play lower notes. This is very obvious and visual on the trombone, but can it be compared to how a trumpet or baritone horn works? Yes! On the slide trombone, there are 7 positions. On a baritone horn, euphonium or trumpet there are… wait for it… 7 possible valve combinations! This means that we can compare trombone slides with valve combinations. Here is how it compares one-to-one between a euphonium (or a baritone horn ) and a trombone. Note that the relationship between the trombone and trumpet is the same, the trumpet’s fundamentals just sound one octave higher.

I hope this article has enlightened you regarding the trombone slide positions. Consider printing the trombone slide chart and hanging it at relevant places such as your local bus stop and supermarket. Have fun playing in tune, and don’t get lost among all those slide positions! Check out this trombone sheet music resource – I promise that it will make you move that slide! Or go ahead and brush off those major scales.

With 21 pages of free trombone sheet music - guaranteed to improve your playing!

Check your email and you'll find a link to your free sheet music. 🎶🎵

Start your free trial and get instant access to the largest collection of trombone exercises and sheet music online - more than 2.000 pages of trombone sheet music. For both jazz and classical trombone players.

Not a trombone player?

"Improve your trombone playing with the largest collection of trombone sheet music and exercises online - over 2.000 pages with exercises and etudes. You won't find this content anywhere else!"